Two days after compiling a brief submission to the above delisting proposal (the Preliminary Determination), a completely coincidental flora survey being undertaken by myself for the Clarence Environment Centre, highlighted a very relevant issue. Therefore, I would appreciate your adding the following addendum to my earlier submission.

That flora survey was being undertaken on private property some 30km south of Grafton in the Kremnos area, for the Land for Wildlife program. Kremnos is also approximately 20km from the Chambigne NR where my wife and I first discovered the undescribed Boronia that later became known as Boronia hapalophylla – Duretto, F.J.Edwards & P.G.Edwards.

Subsequent to that initial discovery, specimens from populations of Boronia collected at a Flaggy Creek and Sherwood Nature Reserves were determined to also be Boronia hapalophylla. However, as detailed in my previous submission, there are a number of differences that have been noted, leading us to believe those southern populations may be a different species.

In more recent times, Boronia hapalophylla has been found at the Hayards Crossing Travelling Stock Reserve at Kremnos, The Clarence Environment Centre was contracted by Local Land Services to undertake a comprehensive flora survey and vegetation classification mapping of that reserve in 2019. As a result of that in-depth survey, I am of the opinion that and population estimates that have subsequently been announced, are significantly inflated, possibly through extrapolation of numbers, noted in plots or meander surveys, across all 90ha of the reserve, much of which does not support the species. Nevertheless, the reserve, and the greater Kremnos area does contain important sandstone habitat which supports significant populations of the Boronia.

Kremnos lies within the Jurassic Kangaroo Creek Sandstone belt extending from Glenreagh to Casino, which supports large numbers of species endemic to those scattered outcrops.

The Northern Rivers Regional Biodiversity Management Strategy (2010), has mapped the Kangaroo Creek sandstone belt as a Centre of Endemism, see map at right, with Kremnos clearly shown as an area for priority conservation efforts (the large green oval around the name, Hayards Crossing).

As stated in our previous submission, too frequent fire is a major threat to all of these sandstone areas, and is slowly denuding these landscapes of large trees, thus altering the ecosystems. How this trend will ultimately affect the large number of threatened flora species, endemic and others, living in those areas is unknown. This, along with the ever-increasing threat from high intensity fire as the climate heats up, is seemingly not considered by your Committee when compiling this Preliminary Determination.

While on the subject of endemism, we need to question why Boronia hapalophylla been singled out? Dozens of other threatened endemic species, including Grevillea beadleana, Bertya sp Chambigne NR, Angophora robur, Simonachne maidenii, to mention only those at Chambigne NR, could be likewise be considered “secure” under the arguments put forward. Is that where this is heading?

The rationale behind the Preliminary Determination

S2. None of the 5 sites in gazetted conservation reserves are being managed to protect threatened species in any way or form, with no weed eradication work ever having been undertaken by the National Parks Service, in Chambigne Nature Reserve, or, I suspect any of the other 4. The same goes for at least one (the largest) of the “privately owned” conservation areas. In my opinion B. hapalophylla is not secure in those areas over the long term.

S3. Concludes that: “Currently, the population of Boronia hapalophylla is regarded as a minimum of 17,780 (P. Sheringham in litt. April 2022). Frankly, 17,000 doesn’t seem all that large a number. However, I am then accurately quoted as claiming that, “decline is no longer continuing, and this subpopulation (Chambigne NR) is currently regarded as secure (J. Edwards in litt. April 2022).

I would, at this juncture, like to stress my use of the word “currently”, and had I thought for a minute that my comment would lead to the removal of protection for the species across the board, I would certainly have added the following provisos.

Firstly, because the B. hapalophylla is in a conservation reserve, does not mean the species is protected. In 2017, a major bushfire destroyed what little fencing there was surrounding the Chambigne Nature Reserve which have never been repaired, and since then cattle have been free to roam across the entire reserve. As well, since the reserve’s dedication 20 years ago, not a single cent has been provided through the National Parks system for weed control. The only management initiative has been the occasional bulldozer sent in to remove fallen trees from those few existing tracks, a process that generally causes more erosion and additional weeds, and tracks are invariably blocked by bushfire debris, or washed away within months.

According to the following mapping, 8 bushfires, all deliberately lit impacted the Chambigne area between 2002 and 2016. 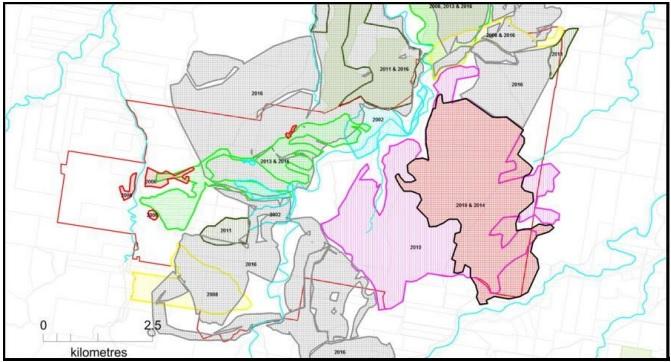 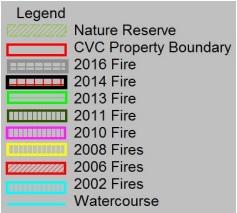 Nothing has been effectively done to prevent these fires, which are usually lit by adjoining cattlemen.

Therefore, I would like qualify my earlier comment, by stating that, while there are no current signs of decline, I do not see a secure long-term future for any threatened species in the Chambigne NR.

8. I believe the claim that “Boronia hapalophylla is regarded as having four threat-defined locations when the most serious plausible threat of changed fire regimes is considered”, is flawed. If the 2019-20 bushfire catastrophe has taught us anything, bushfire knows no boundaries. Apart from that, I only know of 2 geographically defined subpopulations.

9. Damage through infrastructure provision for the Shannon Creek dam, was the reason for the species’ initial listing, but its completion, does not mean that the threat no longer exists. Recent poisoning of plants along a 50m wide transmission line through the Shannon Creek population, the regular use of “tree smashing” machines (for want of a better description) along all easements, road verges, pipelines etc., a process guaranteed to introduce weeds, and recently announced plans to construct a dark sky park somewhere in the immediate area, are all contributing to on-going destruction of threatened species and their habitats.

12. One thing that needs correcting is the suggestion that most of the populations of Boronia, currently classified as B. hapalophylla, are currently in conservation reserves, with large areas of their habitat being on private land. S 12 correctly asserts that their “… core habitat is largely not conducive to clearing”, with most privately owned land in the Kremnos area being steep, rocky, with low fertility. This leads to the claim that, “clearing is not regarded as contributing to continuing decline (of Boronia) except in highly localised instances”.

This brings me to the catalyst for this addition to our submission to the de-listing proposal. Two days ago, when undertaking a flora survey of a private property at Kremnos, I took the following photograph of the typically sandstone landscape with its unique healthy flora. 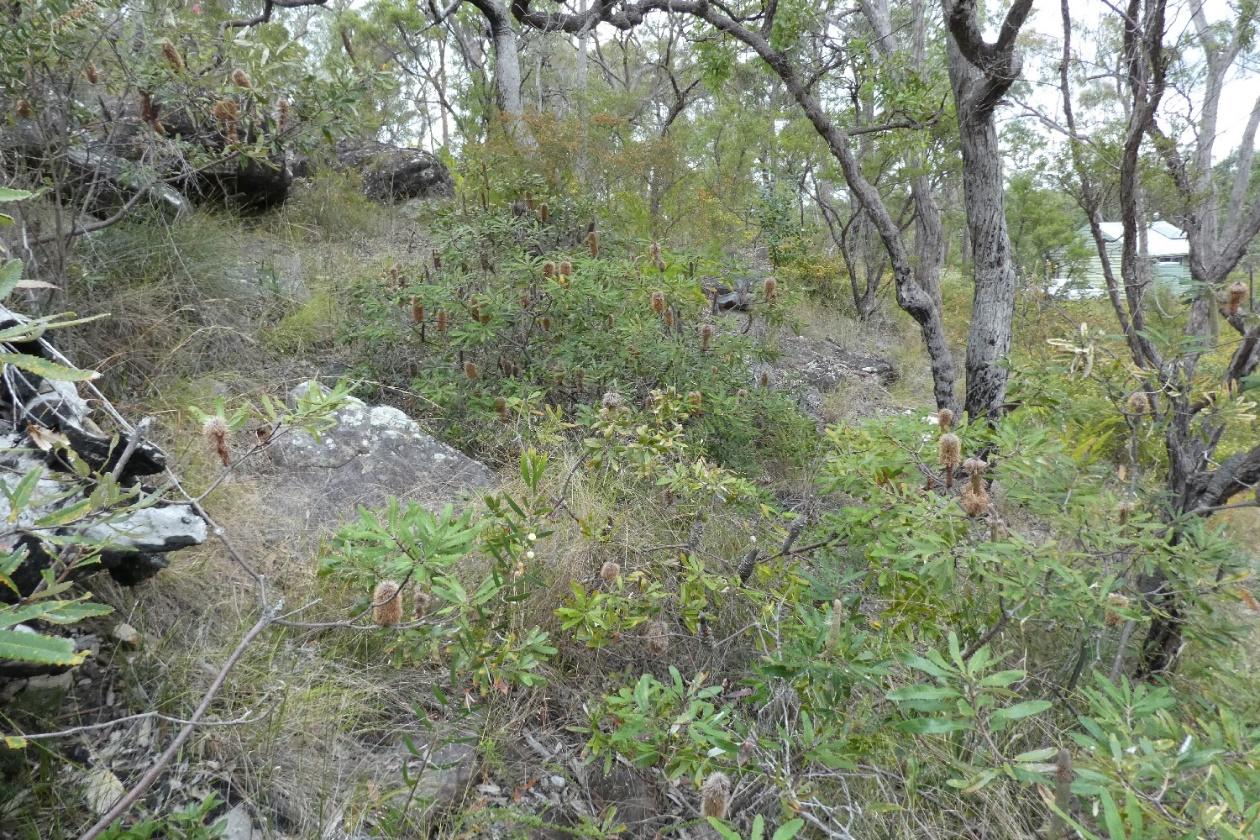 We humans are an opportunistic species. Most see the above landscape as forbidding, and non-productive, so the value drops accordingly. However, others see the potential to capitalise on these cheap assets – I turn around 180 degrees, and take the following image. 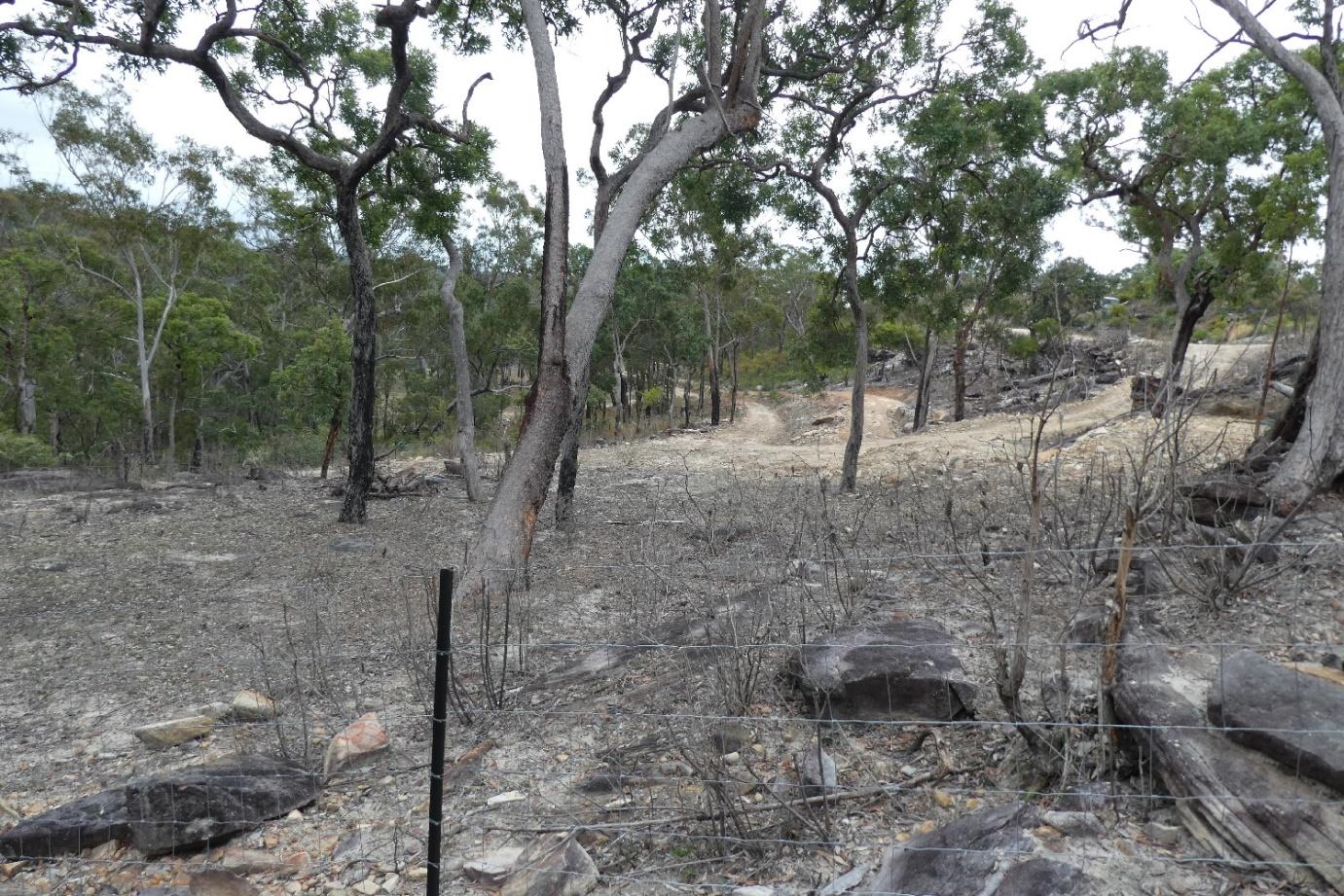 This is the result of an enterprising family who see real value in that forbidding landscape, and have decided to farm goats! There is no trace of greenery below 2m above ground level, and this is towards the end of one of the wettest years on record. The erosion and loss of what little topsoil remained must have been significant.

Ironically, this land degradation is completely legal. There would certainly have been B. hapalophylla present, along with at least 4 other threatened species that I recorded on the other side of the fence, but being a “farmer”, the owner is not required to get approval, or undertake any sort of environmental impact assessment prior to introducing the pests.

In short, if this practice gains popularity, nothing can be deemed secure, and certainly it overturns the assertion that, “clearing is not regarded as contributing to continuing decline (of Boronia) except in highly localised instances”. This could be classified as a localised instance, but one case is one too many in my opinion, and I have now been informed that goats are being promoted as a weed control strategy in TAFE’s Conservation Land Management course in Grafton, or at least by one of their teachers.

Right now, given the above evidence, I strongly oppose the de-listing of any endemic species from the Kangaroo Creek sandstone country, and fear the potential domino effect of other de-listings, could significantly downgrade the ecological status of these communities. They are already sadly neglected, criminally so in my opinion, and this is something that desperately needs to be turned around.

Scientists are predicting the possible loss of 30% of the planet’s biodiversity through the impacts of climate change within 80 years, less than one human lifespan. To suggest any species is “secure” is stretching credibility, much less one with such a restricted range as B. hapalophylla.

I feel that, instead of wasting time writing submissions to prevent de-listing, I should be spending time working on threatened species nominations for the scores of species that I know are in serious decline and currently have no protection.

We thank the Scientific Committee for this opportunity to comment.

No comments to show.